I was introduced to country music many years ago by a good friend, and my daughter also caught the bug and loved the music as much as we did.

One of our all time favourites was the country legend Garth Brooks, and we have spent many a hour singing along in the car or dancing around to his music, which either leaves you hopelessly sad or ridiculously happy.

He sort of hung up his boots (forgive the pun) a few years back, and the country scene moved on and became a bit more “pop”, and the stars that we followed were sort of pushed aside and overtaken by the newcomers.   So our own interest waned a little.

Until 2014.  When in a big flurry of excitement it was announced that Garth Brooks was making a comeback and he was doing a comeback tour.   The closest he was going to come to us was Dublin, but that was close enough.

You can’t imagine the excitement at the possibility of seeing our country idol live, after we thought it would be totally impossible in our lifetime.

The logistics were a nightmare.   First of all we had to get tickets.   Both myself and my daughter sat bonded to the PC the morning the tickets went on sale on ticketmaster, and within minutes of the sale starting, the Friday and Saturday performances were sold out.

But within seconds, Ticketmaster added an extra night – Sunday, and we were suddenly both in the queue, and unbelievably I found myself with two seats half way up Croke Park arena.   And I booked them, even though we both had to be back at work on the Monday.

To say we were excited was an understatement.   But then the logistical nightmare started. How were we going to get to Dublin?  How would we get back for work at 8.30 a.m. on Monday?  It turned out we only had two choices, a long ferry ride or fly.    Stacey managed to secure two Aer Lingus seats on the sunday morning, flying back in the wee hours of Monday.

The hotels  had hiked their prices to ridiculous levels, Travelodge was up from €35 to €300 / night over the concert weekend.   And it occurred to us that it would be a total waste of money.  We wouldn’t get a taxi back to the hotel until about midnight, and we had to be back at the airport for 3 a.m. to check in, so it seemed pointless.  We would just head back to the airport after the concert, find a seat in costa coffee and wait it out, then on arrival back in Birmingham we would make the mad dash back to work, with our work clothes in the boot, get changed in the loo and try to make it through the day without falling asleep.   But it was going to be worth all that effort.

The dates loomed and the excitement grew.  Until a few days before the concert.

Suddenly it was announced that Garth had decided there were so many disappointed fans who hadn’t been lucky enough to get tickets, he would ask Dublin City Council for two extra nights.   They refused, citing the unacceptable disturbance that two more nights would cause the locals.  A small band had petitioned that 3 nights was already far too much disruption in terms of noise, traffic etc.  I can see their point, they only normally have to endure one or two nights a week.  And they were there first I suppose.  But then many more pointed out the profit that would be generated in the city for vendors, taxis, restaurants, hotels etc, and it was economically insane not to allow the additional dates.

But suddenly Garth was intimating that it really wasn’t cost effective for him to only do two nights, and then, in horror, he announced that it was impossible for him to choose which fans would see him and which wouldn’t.   So, rather than have to let those fans down who couldn’t buy tickets, he would cancel the tour dates if he couldn’t have the two extra nights.

Amidst outcries from both the yay and nay supporters, the council refused to be bullied into it, and true to his word, Garth pulled out, even though allegedly his stage show was already halfway across the ocean. 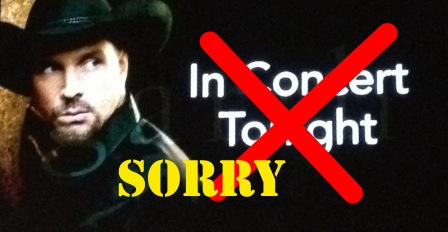 We got our ticket money back eventually (I’m sure a bit of interest was made by Ticketmaster before they released the refunds) but we lost over £200 in airfares, which unfortunately were non-refundable, because hey, it wasnt like he wasn’t going to come was it?

Another public and political outcry ensued, and many attempts were made to change the decision, but both sides were intransigent.

But to disappoint, and worse still, cause financial grief to your fans who were fortunate enough to get tickets is damn right unheard of, and damn right unacceptable.

And like a spoiled child, when he didn’t get his own way, he took off home with his ball.

He generated massive publicity, kept his tour in the US ( one wonders if the ship with his stage had ever actually left port), he cordially invited those who missed out to fly over and see him in the states, and never apologised to his fans that he let down in such a dreadful manner.

And worse still, he deprived me of an opportunity to spend some quality time with my eldest daughter, something I get to do rarely since she married.   Probably more disappointing to me than missing the concert itself.

So Mr Brooks, if you are reading this – You are a no good, son of a bitch “has been”, who doesn’t deserve any fan base whatsoever.   I will never buy another single or LP you produce, I would never travel anywhere to see you (even if you turn up at the Palace Mansfield) and if I ever hear you are thinking of coming to the UK I will actively work with my local MP to prevent your visa application being processed successfully.   You are not the type of person we should be letting into our country – our people deserve better treatment.

I might change my opinion if you send me back my £200, but then you or your management team haven’t had the courtesy to answer any of my emails, so I doubt my loss is high on your agenda, or your conscience. It certainly wasn’t something I could afford to throw away.   Shame on you.

Garth, you’ve been hanging out in too many “low places”, and it’s took its toll –
you are now officially a low life.