Since an early age, I’ve always had an obsession with flight.  Even now, I marvel at how we can make a 300 tonne aluminium tube, full of people and their luggage, lift off the ground and stay in the air for hours at a time.

My mum and dad, or just my dad sometimes, would take me to the aeropark at East Midlands airport where we would sit and wait patiently on a Sunday for the one or two take off’s and landings that it handled at the time.

My father’s own obsession was lawn green bowling, closely followed by manicuring his lawn, and I also followed him around bowling on a regular basis.  But that’s another post.

It’s relevant though because when I was eleven, my dad managed to get through to the national finals held at Mortlake in London, and me and mum travelled down with him to watch.   And the first thing that I noticed was the constant stream of planes zooming over the bowling greens on their final approach to Heathrow Airport.

I’m not sure how many days we were there, but it seemed like weeks, and I’m not sure if it was me getting bored or mum, but one day she decided that we should visit London Heathrow Airport and see where all these planes were going.  I was naturally thrilled; compared with EMA, London was a REAL airport.

I learned later from mum that this was her first adventure without dad and being well before the Heathrow Express, this journey of only around 20 miles meant both a train and bus journey to reach our destination  – my first real train journey too I think.

We set off early one morning from Richmond station, and caught the train for the few stops to Feltham, where we then caught a london bus through to London Airport.

Although Heathrow was still only a fraction of what it is today, it still seemed massive to an eleven year old boy.

We worked our way from the bus station passed terminals one and two, and headed for the Queen’s Building, an admin block recently opened by the Queen,  which stood centrally on the airfield and had a roof top garden and observer’s viewing area with a commanding view of the runways.

Reaching the rooftop, we stood in the morning sunshine surrounded by mostly men of all ages armed with plane spotting books, large binoculars and short wave radios which they had tuned into the london approach frequency.   We watched the planes for a while, a mixture of old prop airliners and some more modern jets like the BAC 111, the trident and the most thrilling of all, the big 747’s, only launched the year before.

Then mum took me to the gift shop where we bought a drink and she treated me to my very own Observer’s book of airliners, complete with a full list of every tail registration on every aircraft currently in service around the world.   I spent a few more hours it seemed ticking off the tail numbers as they rolled in and out of the stands, and i’m fairly sure I remember seeing the concorde zoom past on one of its early test flights.

At the end of a fabulous day, mum took me to the gift shop one last time and I bought my souvenir Corgi Concorde, complete in BOAC livery – I later found out this was a promotional issue, as by the time Concorde finally entered service, BOAC and BEA had merged into British Airways, and it never carried the BOAC logo. 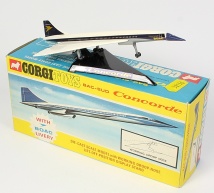 This particular Concorde flew many more miles around the bowling greens of Mortlake than the real concorde was flying in the skies around London, and it made its first long haul flight in the back of my dad’s Hillman Imp as we drove home, making a few fuel stops on the big green suitcase that sat on the back seat beside me.

Thus a boyhood dream was fed and nurtured.   How surprised would we have been if we knew what was in store for me in the future?

1 thought on “The birth of a life long obsession.”