From being a little boy, I only ever wanted to be a commercial pilot.   I know a lot of boys wanted to be fighter pilots, but I had been to Heathrow with my mum (See previous post) and there was only one type of plane for me – an airliner.   300 tonnes of steel (OK, I didn’t know what a ton was in those days) jetting off to sunny climes every day.  It would be a dream come true.  And of course at that time I didn’t even KNOW about the girls!

Unbeknown to me, my Dad had a different career carved out for me.  Living in a mining village, and with both grandparents and my father being honest down to earth grafters down the pit, I assume Dad thought it would be only fitting that I followed in his footsteps. Plus his best friend was the colliery careers officer, so he would put a good word in for me.

It’s times like that that you are glad you didn’t know what your parent’s had in store for you.

So school life was uneventful, I was a mid-achiever in everything but reading which I excelled at.   Exam time came around and I found myself floundering in many subjects.  Chemistry was OK until they started with valencies, Physics was OK until we got into thermal equations with delta T, and maths was a non-starter.  Film studies was an easy A, watch a film and write about it.  Writing I could manage, I could write for England.  Why did no-one notice I could write?  I could have been a journalist.  An author.  A novelist.

I was OK at art but school wasn’t the place to hone techniques.  The art teacher regularly drooled over one or two girls in my class who were obviously going to make A level quite easily – and were also rather well developed by then but I’m sure that wasn’t influencing his attention – woodwork I was Ok at, metalwork fair, French mediocre and German I was just, well – Scheisse.

So when exams came around, I sucked.   I got a couple of O levels, and 11 CSE’s ( a lesser qualification to an O level) of mixed grades, none of them good.  Grade 3 CSE in Maths is particularly appalling.

After many years I realise that the problem was, I wasn’t bad at Chemistry and Physics, I was bad at maths.    The subjects I really needed to be good in relied heavily on maths capability.  In those days, the subject co-ordinators were not joined up, and no-one would have said  “If Robert were better in Maths he would do better in Science”.

I blame the SRA power builders.  When I was eleven I moved up to the new comprehensive school where they had introduced this new method of teaching for English and Maths – You went to a box, pulled out a work sheet, answered the questions, and then checked your answers against the answer cards in the back.  You marked them yourself while the new young teachers flirted with each other and planned their evening drinking sessions in the cloakroom next door, and you would just show them your line of ticks to get their permission to move up to the next level.

Even at this early age, I was probably showing signs of my superior problem solving skills.  I soon had most of the children on level 13,and our teacher was being singled out for how extremely well she was bringing her kids on in Maths and English.

What she didn’t realise was our unique way of doing maths – go to the box, take the worksheet AND the answer card, copy the answers down – but not EVERY answer, that would be TOO obvious – and then sit and chat until the teacher returned flushed faced from her mid-morning flirty liaison.

Moving on to my last year at school, and we suddenly find we have a session with our new careers dept.   Now we had always had a careers teacher, but to be honest he was firmly in the pocket of the local pit and either recommended that direction, or university.  There was no middle ground.    The careers dept. was a bit ground breaking in that respect, and manned by a careers co-ordinator and some outside help from county hall education department, I suppose it was a step in the right direction.   But not for us, it was too late.

(Many years later as a school governor at the same school I spearheaded improvements in careers, earning the school a “Careers Mark”.   At least others wouldn’t suffer the same fate.)

“So Robert, what do you want to be when you leave school?”  “A pilot”.  “Oh”.    The advisor wanders off and gets a big book.  “Ok, so you have two choices. Join the RAF, or go to be a commercial pilot on one of the airline training courses.”   Yay!   “It says you have to have an A level in Physics and one in Maths to get a place – How are your results looking?” Deflated.  “Hmmm.  Not good.  Perhaps you should consider the pit?”… 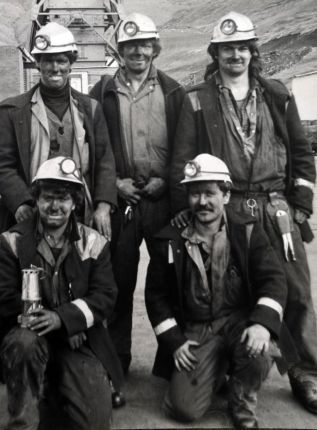 One thing I did seem to be quite good at was leadership.  And I really enjoyed the planning and leading involved in my Duke of Edinburgh.   I planned and led three expeditions into Derbyshire armed with only map, compass and tent.  Get off the bus in Matlock and you were in the most barren wilderness imaginable.

Inhospitable terrain all the way to Darley Dale.

As part of the course you had to choose a “service” to learn about, and I chose the police.  I really enjoyed learning about being a policeman and decided, as the chance of attaining a double A level was as likely as winning the football pools, that this would be a good second option.

In those days you could join the police cadets at 16, which led to a full time job at 18.  At the same time, my dad’s mate the colliery careers officer arranged a trip down the mine for me, and this gelled my career choice…

Having decked myself out in my scruffiest clothes, and fitted with my helmet, lamp, battery and ready rescuer (gas mask in a box), I crammed into the “cage” which would hurtle us down to the main roadway, which connected the shaft to the faces.

Being inexperienced, we were not allowed to ride the man belts, huge fast conveyors that carried the miners from the roadway to the faces, so we walked in silence down the long downward slope towards the working end of the mine.   At the end, the tunnel opened out into a cavernous room, with a huge cutting machine at the centre and two coal faces running perpendicular to the main tunnel, about 3ft high.    We crawled down the right hand tunnel, banging heads and clouting knees on the hydraulic props keeping the roof up along the face.    With hurting head and sore knees, the face ripper came trundling past, a cutting machine which rips off the coal onto a conveyor which then ferries it back to the main tunnel.

Having been sprayed with ice cold water from the cutter, we then headed back up the tunnel, stopping halfway back to switch off our lamps and experience the absolute lack of light that you will never experience on the surface, no matter how remote you believe yourself to be.

Back to the shower block, dirty side of course, and then long scrub trying to get the coaldust out of your pores, a quick bacon sandwich from the canteen (my first meeting with Aunty Glad, although I didn’t know it at the time), and then home.  A look in the mirror revealed the tell tale eyeliner-like black eyelids common to all coal miners.

A proud Dad let everyone know I’d been down the pit, but unfortunately it only reinforced my determination not to take that career path. (Dad was rather pleased that my brother followed his footsteps, although that was short lived).

The police seemed the obvious choice, so I set off for Mansfield police station to enroll in the cadets with my mate Stevo.    Unfortunately, neither of us made the cut.  Stevo (real name Ian) had a dodgy leg from a previous accident which had left him with a severe limp, and I didn’t make the height requirements – 5′ 8″.   The woman police officer seemed to take serious pleasure from telling me I was only 5′ 7 1/2″, even though at 16 I was likely to grow a little still.  i was seriously gutted.

That’s what you call a short lived career.

Back to the drawing board, and with no career path in sight I managed to convince my parents that I should stay on in the sixth form.   I was doomed from the start.  I only qualified for A level English Literature and A level German Literature.  Although learning that Desdemona was a strumpet, Chaucer’s Wife of Bath was  “…fair, and reed of hewe”, and that old German was even more unintelligible than modern German, (Gruss Gott Hans!) none of this was setting me up for a career.

I watched the majority of my friends applying for University or apprenticeships and succeeding, and just after the start of year two in the Sixth Form (why they don’t call it Seventh Form I’ll never know), I told my mum I wanted to leave and get a job.   I didn’t hear anybody try to talk me out of it.  Times were hard and me paying my way was overdue I’m sure.  My dad suggested the pit.

Mum helped me apply for any and all jobs in Mansfield.  The only criteria was there had to be a vacancy.  I applied for car mechanics, office workers, computer programming at the local brewery (an embarrassing episode in its own right) and a lab technician at a local Foundry.  By a sheer fluke, I got the foundry job – I don’t to this day know if my uncle Russ put in a good word as he worked there too.

So here I was, ironically up to my ears in coal dust (an additive in foundry sand) nearly as dirty but with the added bonus of being regularly burnt to a crisp with molten iron sparks.

(NB to reader:  Never wear manmade fabrics in foundries.  They melt and stick to your skin.)

The rest of my career choices is for another post, and not the purpose of this one.  The important point here is I had little ambition beyond my dream job, poor or biased advice and zero support where my own desires came into it.

I’m also sure that had I been more vocal, more determined, I may have got further – although from a miner’s background, there wasn’t a lot of incentive to break the mould.