A couple of weeks ago, I kissed my grandma for what would be the last time.

I realised this at the time, which is why i had to make sure I took the opportunity.  I wondered if she understood too?

I had just spent the last few hours watching her painfully struggling against pneumonia brought on by some incompetent in the NHS who deemed it proper to fit a device to her bed, without checking she could use it correctly.  The same incompetents discharged her from hospital without checking she would be safe in her own home, and not a day later she was found hanging upside down out of her bed, trapped by one leg in the new bed rail, lying face down in a pool of vomit that she had breathed in.

It is impossible to imagine the pain and suffering she must have gone through in those last few hours.

And so I sat and watched her struggle to get her breath, reaching out to her sons and daughter vainly, who sat by her side not knowing what to do.  And slowly she got tired, and stopped struggling, and started to drift to sleep.

And I had to go, to fetch Sue from work.

And I kissed her as she slept.  I don’t know if she knew I had.  But I knew it was going to be the last time.

For sometime previous to this I had struggled with a lot of guilt.   For years we would visit Grandma regularly, but as we all do, we find excuses why we are too busy, and say to ourselves our immediate family comes first, or we will find time soon.

And I worried that maybe time would run out and I would kick myself for not making the effort, so we did.   But unfortunately Grandma had become more difficult to talk to, being either very deaf or just very awkward, making sensible communication impossible.

So our visits diminished further.    Then my own mum started reporting that she would be in bed by three in the afternoon, and couldn’t get to the door to unlock it, and was becoming increasingly incontinent meaning that most visitors were finding her in a mess.  And that gave us an even better excuse not to visit – how could we if she was in bed before we got in from work?

How could we visit if she couldn’t answer the door?

But I finally realised these excuses were not good enough.  Her annoying phone calls asking “Have you forgotten me?” stopped arriving, and I decided that I would make the effort to go with mum when she visited.

My last proper visit was fairly hopeless.  She didn’t understand a word I said, although it was remarkable how some things were heard with crystal clarity.  Selective deafness it seemed.

My next visit would be more upsetting. Grandma had been falling quite regularly and it was obvious she needed 24 hour residential care, but nothing was forthcoming, except for the odd visit from a carer.  And so it fell on me one morning to go and rescue her after a carer called mum to say she had found her on the bedroom floor.  She had been there all night.   I managed to convince the ambulance crew that she needed admitting, and they were happy to do so as she was hypothermic.  By coincidence her boiler had chosen the same night to fail, leaving her lying on the floor in the freezing cold.

I spent the morning in A & E with her, and then visited her in hospital a few times before they discharged her on the fateful day.

During those visits I think we re-established our bond, and I somehow felt forgiven for neglecting her for the last few years.   She smiled, and as she recovered said “Am I doing well?” like a small child.  “You are doing well” I replied, holding her hand while she smiled at me.

My next visit would not be so comforting.  After receiving the call from mum, arriving in the hospital I found Grandma in a sorry state.  Wrapped like mother Theresa in blankets, looking at last her full 101 years, and looking dreadfully ill.

I tried to stay strong mentally and keep it together, but the enormity of the moment hit when I had to talk on the phone to my youngest, and I was so choked up I couldn’t get the words out.  She in turn broke her heart over the phone, and it instantly took me back to 27 years before when I had to sit on my eldest daughter’s bedroom floor and tell her that Great Grandad Joe had died, and she had broken her heart too.   He really did mean the world to me, and I took that day hard.  And suddenly I was back there, and yet here too, if that makes sense, reliving the pain and yet living it afresh.

I sat with Grandma for as long as I could, taking it in turns with the other family members, and in between trying to give comfort to them as they blamed themselves for her current plight.

And shortly after I had collected Sue and arrived home, I got the message she had slipped quietly away.

Grandma with one of my paintings that she cherished.

Grandma had been a huge part of my life for many years. Raised in the house next door to hers, I would spend as much time with her and Grandad as I would in my own house.  And if I wasn’t there, I was at my Dad’s parents in Blidworth.  Grandparents meant everything to me and there has been such a long time between losing the other three and losing Grandma Burch, it almost seemed like she was immortal and would never die.   Who knows how long she would have lasted with a bit better treatment from the “experts”.

I could write a whole book about my adventures with Grandma, and so I won’t even try to cherry pick the memories. 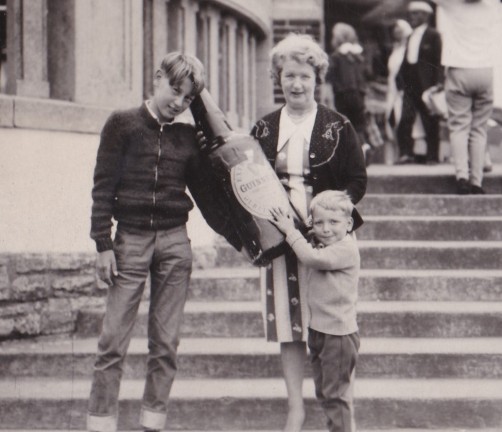 The main thing is, I managed to put my worse fears to bed, and had spent some meaningful time with her prior to her passing.  At least I no longer had that guilt to contend with.  It’s a shame we couldn’t have spent it in better circumstances.

My only regret is she had such a remarkable life story, and for years I said I would take a tape recorder to her house and get her to tell her biography;  but like all things I left it too late.

So, Gladys Irene Ada Burch, thank you for loving me as I know you did; You are, and always have been, my personal treasure.

People talk of their loved ones meeting up again with their long lost partners in the after life.  I’ve always considered it to be whimsical fantasy to ease the pain of someone’s passing.  But for once in my life, I truly hope with all my heart it is true, and I hope Grandma is now reunited with Grandad Joe after a 27 year long enforced separation; She deserves that much. 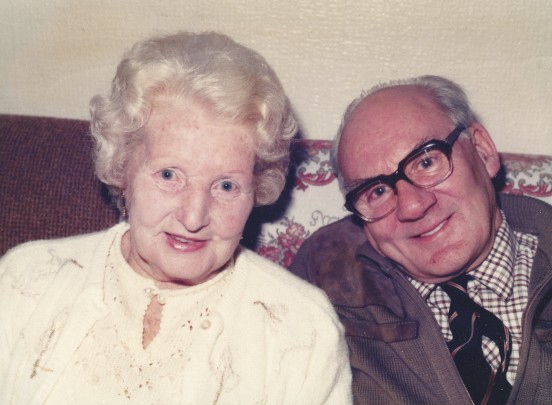