It’s a question that is often asked once a year – where were you on the day of the world trade center attack? September 11th 2001.    Many people will always remember where they were.   My friend for instance was in a plane over New York at the time, and was diverted to Maine and holed up in a hotel for three days as all air travel was banned.  I know exactly where I was… and it remains as vivid today as it did back then.

It’s funny how things work – quite out of the blue someone posted on facebook today Where were you?   And my friend replied.  A Bit odd considering we are only in April.    But later I was watching “Splash” with Tom Hanks and Daryl Hannah and at one point you see the Manhattan skyline, complete with twin towers.  And that made me think again back to that day in 2001.   Sixteen years ago.

I was working just outside Warsaw city in Poland with my colleague Brian, on our first Fibresand project for our new licensee.   It had been a crap week so far.  It had not stopped raining incessantly since we arrived, our prototype machinery was malfunctioning and we had realised all too late that our new weighing equipment had been mis-calibrated by the supplier and the whole weeks production was incorrect, and the licensee wasn’t at all happy.   The site was crap, the location was crap and no-one spoke any english, even in the hotel.   One guy spoke a little german and was happy to try to converse with me in rusty German, which I had learned at school.

We had arrived that morning on site, to find the generator had failed, and we were rapidly trying to fix it.  We got it running just before lunchtime, and we had sent the polish guys for an early lunch and asked them to bring us something back to eat while we got cracking.  Two more days and we were out of there.

We stopped about 3pm and started on our lunch, while the guys went to the local cafe for coffee or something. 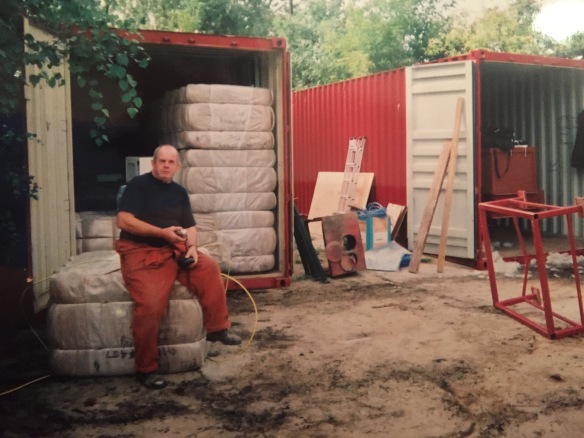 Brian having a break just before the news broke.

Suddenly our german speaking friend came running towards us, very agitated, shoutling loudly and excitedly in polish.     We didn’t understand what he was trying to say.

“Auf Deutsch” I said, trying to calm him down.”Langsamer bitte – Slow down please”

He calmed down and composed himself slightly.

I sort of knew what he was saying, but couldn’t quite understand it.

Brian asked me what was the commotion about.  “He says something about the US, a plane, and the pentagon, two towers, and boom!!! – I think there might have been a plane crash or something”.

The guy ran off back towards the cafe, he didn’t come back that day.

We carried on mixing, the rain started again, and soon it was 5 pm and we walked back to our hotel which was a couple of blocks up the road.   The roads were surprisingly quiet.

As we walked into the lobby of the hotel, there was a crowd of guests gathering in the small bar.  The TV was on and the view was obvious.   It was one of the world trade center towers on fire.   The commentary was in Polish and we couldn’t understand it.  I arranged to meet with Brian for dinner down in the restaurant at 7 pm, and we went to our rooms.

I switched on the TV and changed to CNN.    And watched in stunned silence as the first image was the plane flying into the North tower.   At that point it was horrific enough.   Then a second plane flew into the South tower.   That didn’t make any sense.  One crash, one accident, understandable.  But two?  How unlikely was that?  But within minutes it all made sense.   It was no accident.   And then the news from the Pentagon.    And finally the fourth plane in Stoneycreek. Then the towers came down one by one.  And the title changed to “America Under Attack”

It wasn’t comprehendable.  It was just two difficult to take in.  I called Sue, she was equally lost for words.  She was panicking about our return.  I hadn’t even thought of that.    And then it was announced that all air traffic  had been banned;  we were not quite sure what was happening.   I called Brian and changed dinner to 8pm.   I had been sat watching the TV and it was already 7, and I was still in my dirty work clothes.

Dinner was equally quiet.  The bar continued to play the news in Polish.    There was a smaller crowd still watching the pictures.  Brian was lost for words, which was good because so was I.

I contacted our office the next day who had contacted the airline.   No-one knew if we would be flying home the next day, and the alternative train ride was a difficult alternative – it would have been easier to hire a car and drive home.

As it was, the skies were re-opened in time and we flew home from Warsaw airport.  It was an unnerving affair.  We couldn’t get dropped off outside the terminal, we had to stop on the next street.   The sidewalk outside departures was filled with soldiers sporting machine guns, and a large tank straddled the front steps up to the building.  I couldn’t quite see how that was going to help.

Inside check-in was longer than normal, as was security.   One guy in a black leather jacket went through x-ray and set off the scanners.  He took out handcuffs and a gun and put them on the machine, and on the other side went to sit in a small office before boarding our plane.   Sky marshal?  I hoped so, otherwise they had just let a terrorist on board!

I have to say that flight home was probably the tensest I have ever travelled.

Even to this day I can see the guy’s panicked face “Pen – Tagon – Boom!”.   It wasn’t happy excitement – it was fear.

We visited the site of the towers a few years later, and couldn’t quite imagine how it must of been on that day.

And to be honest, I don’t want to.   Even now I avoid watching programmes about it, and I’ve never seen the film about flight 93.    I don’t need to, I can imagine the terror the people were put through.

So that’s my story.

(Photos borrowed from the internet – if you believe you have copyright on them please contact me and they will be removed).