So, I felt I had finally arrived – from lowly lab technician in a third rate foundry to qualified quality / health and safety manager, fully qualified quarry manager, self taught IT “consultant” and now, esteemed international Fibresand engineer.  And my horizons where about to become yet even broader…

Singapore.   The so called “Lion City”.   A fanciful exotic destination worthy of honeymoons and retirement vacations, out of reach of most normal people, and I was about to work there!

You would think by now I would be world-wise and have no concerns about any project now, but Singapore?  I mean, this was half way around the world.  Further than even America, and that was a long way!

Picking up the story; it’s 1996 and after a little unrest in the lower ranks, I finally relent and agree to manage the project in Singapore.  To be fair, it was a big ask for a first time project manager.  The job was, to be blunt, HUGE.   A typical project up to now had been maybe 1,000 to 1,500 tonnes.  As a commissioning engineer, I had maybe seen the licensees produce 100-200 tonnes before flying back home.  I had little practical experience of running the plant, no mechanical skills, no electrical skills, and very little experience of man management.  Really, it was probably a disaster waiting to happen.

By comparison, Singapore Turf Club was a prestigious new racecourse being built entirely from scratch on top of an old underground reservoir in the northern town of Kranji.  And the all weather horse sandtrack was a stunning 14,000 tonnes of Fibresand.  Equivalent to more than two years production back in the quarry at home.  And we only had a few weeks to deliver.

The project actually started in June 1995 – the first job was to retrieve the mixing machine from Denmark.  The Danish had realised that actually they didn’t have a lot of equestrian need in Denmark, and eventually were eager to return it.  So we flew over, checked it all out, helped dismantle it, load it up on to trucks and then flew back.  It was interesting to arrive in Silkeborg on June 25th – they were celebrating “half way to Christmas” in the town square and had a large area set out as an outdoor pub, complete with bar, beer pumps selling a special Christmas lager, and scantily clad Danish girls dressed as little miss Santa’s.

Despite my dislike of Smorgasbord, Scandinavia was starting to grow on me…

With the mixing machine back in the UK, it fell upon me to get it back into working order, and make it into a self contained mobile plant instead of the huge static plant it had started life as.  I joined forces with our lead mechanic, and I found I had a gift for creative design.   I suggested a number of modifications to the plant to make it more compact, easier to erect, easier to cable together, and despite some early scepticism, the mechanic soon got on board and helped me put it together.

The plant looked crap – it was a jumble of different colours and rust, broken glass panels  and covered in grime and dirt.  I convinced my manager at the time that we needed to make the plant look more professional.  So  I was given a small budget which I used to repair the broken parts, paint the plant from head to toe in battleship grey paint, and apply some Fibresand logos to the plant components – it would be a standing advertisement for the product.

Even before the paint was fully dry, we were crating up the essentials and packing away supplies for the long trip.  The mechanic had been very good to me – as we built up the plant he gave me loads of tips about conveyor alignment, mixer bar replacement, all the things that he did routinely and he knew I would have to do during the long project. He put together a tool kit, a huge box of spare parts, and  he learned me to burn with the oxy/acetylene torch, weld with the electric welder, and the electrician taught me how to test electrical circuits and fault find with my new multimeter.

The mechanic had been to Singapore before.  He was stationed there in the second world war, and he described the jungle environment, and his visit to the Raffles hotel during his stay.  My own knowledge of Singapore had been from the TV series Tenko, and with no one telling me any different I was convinced we were going to be stranded in the middle of a jungle, far from civilisation, and I started preparing for it.  Remember, this was in the days before google and the internet.  There was no easy source of information in those days.

Inside the small 10ft square plant container which now housed the two large electrical panels, amongst all of the other tools and spares I had also packed a large box of essentials – toilet rolls, soap, paper towels, tins of soup and baked beans, rice pudding, bags of crisps and packs of bottled water – we weren’t going to go hungry or thirsty while on site.

The plant was collected for its 28 day sea trip to Singapore, loaded into three open top 40ft containers.  Three weeks later,  we set off on the first leg of our journey to meet the plant, and our first project on the continent of Asia.

Our first trip to Singapore was to be on an Air France flight using one of the new four engined A340 long haul aircraft – for its time it was quite impressive and well equipped, and surprisingly roomy, although quickly phased out as being an uneconomical gas gussler.

Accompanied by my assistant lab technician, we flew from Birmingham to Paris Charles De Gaulle, then onwards to Singapore – some 14 hours flying not including the stopover. 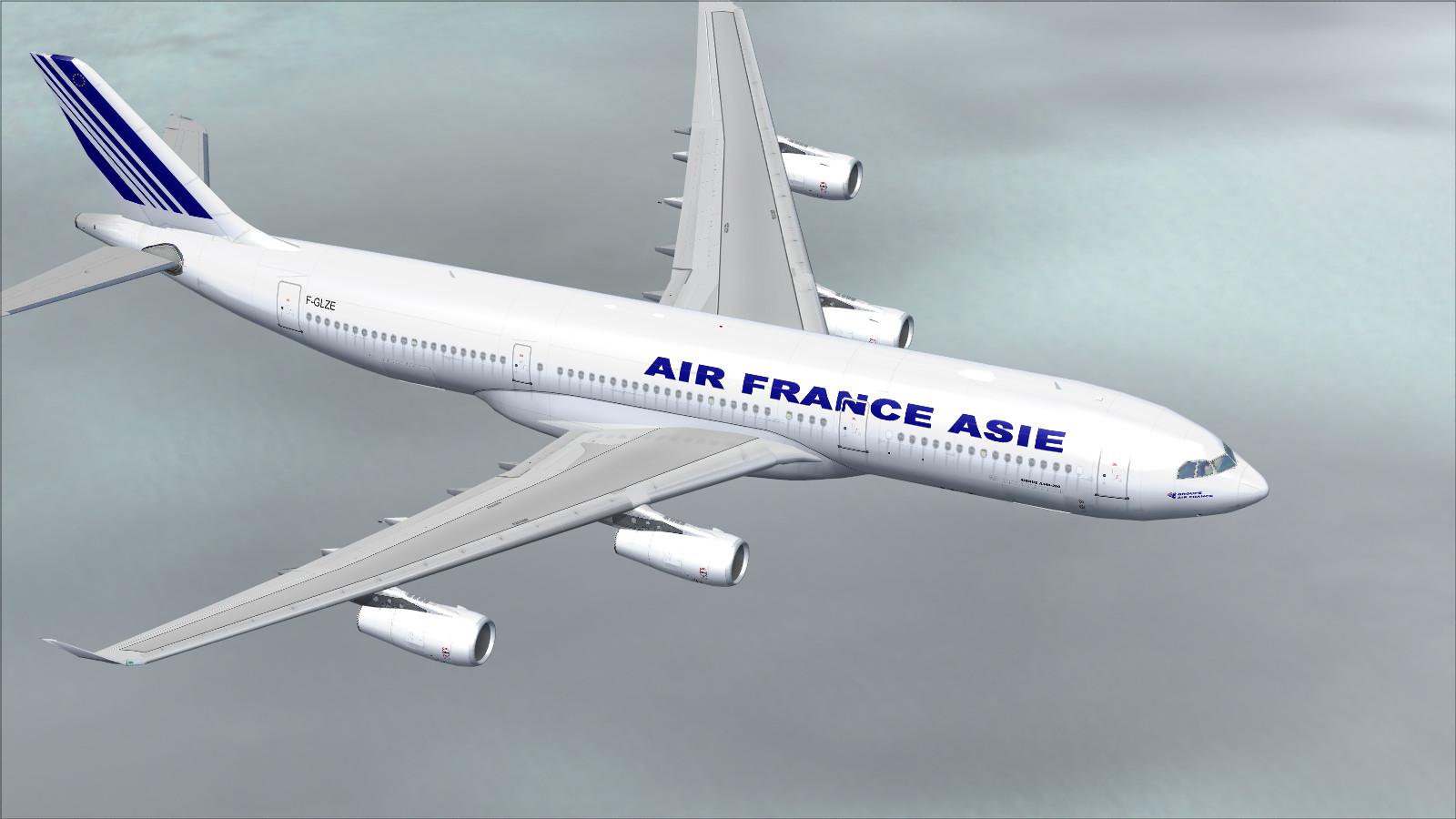 On board, it was a different world to the american flights I had experienced.  Firstly, I was tucked back into economy, where previously I had been getting very used to TWA’s business class lifestyle.  The french air crew definitely did not think much to the English on board. The French customers were very well looked after.  What I did like was the fact that there were always snacks laid out in the rear galley for the whole of the flight, there were sandwiches galore, pot noodles, free kit kats, cans of pop, never ending alcoholic drinks if you wanted it, and even tubs of ice cream – very refreshing on a long haul flight.  And very different to the strict two meal regime on TWA / British Airways.   Incredible to think it happened, but people were also allowed to smoke in certain areas of the plane – namely the large curtained off area next to the centre emergency doors.  A disaster waiting to happen really.

So high I could actually see the curvature of the earth as I gazed out of the window, the plane made its way across Europe, with an amazing aerial view of the alps, down the Adriatic coast towards Turkey, and then over the middle eastern countries.

Following along on the on-screen map, I stared out of the window into the darkness as we travelled over Iran, occasionally spotting the flicker of light from the gas flares on the oil wells below.   then one eruption caught my eye – distinctive from the rest of the flares, this was a huge ball of orange flame erupting up into the classic mushroom shape of a nuclear weapon.  I decided my eyes were deceiving me.  but then another – and another, and soon there were multiple plumes rising from the desert below, lighting up the sky, for as far as the eye could see.   We continued on our path and soon left them behind.

Dinner was served and afterwards I fell into a short sleep.  The blinds had been pulled down to block out the sun and darken the cabin, and with everyone else asleep, it was impossible to even crack open the window blind a little to look out – it was like switching on a huge torch, blinding everyone in its path.  So I had to sit quietly in the dark and contemplate the job in hand.

Soon we had crossed over India and Sri lanka, crossed the Bay of Bengal and we were on the final three hours down the Andaman Sea, making our way parallel to the coast of Thailand and Malaysia.

As we descended, we flew over what I now know to be the easily recognisable Straits of Johore, over the straits bridge connecting Malaysia and Singapore, and then out to the east before turning back for the approach into Changi airport.    I now know there are two approach routes into Singapore, the one mentioned above, or if the wind is against them, they fly down the west coast of the island before making a sharp left, and flying over the marina bay area to approach Changi from the direction of the city.

As we dropped down out of the amazingly blue skies, we banked sharply and slid into some thick cloud, and emerged into torrential rain.

The runway was awash as we landed, and we could hardly see the terminal through the spray.   It was just after 10 a.m. as we taxied up to the stand, and as they opened up the doors, the heat and humidity hit us like we had stepped into a sauna.

The stewardess announced in her cute french accent – “Welcome to Singapore.”